We have previously created a NetScaler Gateway on our NetScaler 11. That’s great! Time to check if it’s secure. I usually use SSL labs SSL test, a widely used tool to test the security of a website.

I have an other blog about NetScaler virtual servers (contentswitching and loadbalancing SSL offloading servers). There is much more theory about SSL in that one. They do basically the same. This one may be great if you are interested in a bit more theory.

Let’s give it a try: 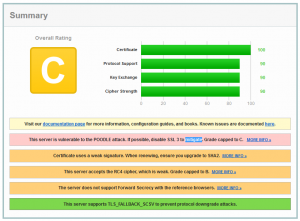 I agree, this is a disastrous result! Just a C- rating? C means: an insecure appliance, there are well known attacks that may compromise this appliance’s security!

Is a NetScaler a piece of shit?

Of course it’s not! However this wizard sets compatibility over security. Compatibility to old versions of Java, that’s why. So we’ll have to fix it!

First issue clearly has to be the POODLE issue as it degraded our rating to C! This one is an easy one: just simply disable SSL V3. Go to NetScaler Gateway -> Virtual servers, open up your gateway, and check SSL parameters:

You see: SSL v.3 is enabled, and SSL v.3 is not considered to be secure. Just simply disable it: click on the pen i the top left corner of this section and uncheck SSL V.3

a new check with SSL labs is by far better: 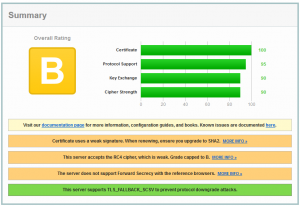 B means good. There are no well known attacks that could harm our NetScaler. Good is not good enough. What’s wrong now? “The server accepts RC4 cyphers”. RC4 is no more considered to be secure. I suggest removing all RC4 based cyphers from the list of supported cyphers. I removed all cyphers but the best we could use so far: 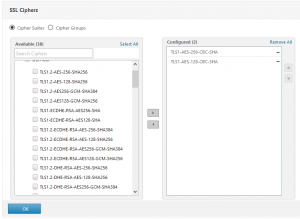 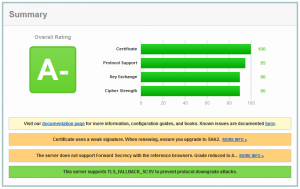 Ah! A-. A is very good. A- is still very good, however there may be some minor issues. I have two issues: First my certificate is a SHA1 certificate (and will get updated to SHA2 shortly), and 2nd I don’t support Forward Secrecy. I have already written a blog about this issue, so I don’t go into this. There is also a good one by Citrix how to get the highest rating, an A+ (outstanding security).

My 2 ciphers are not supported by Windows XP! This may turn out to be an issue! SSL Labs will list issues like that. I can go with it, so I don’t care about it.

Our NetScaler Gateway can now be considered to be secure.

I’d suggest checking security of your gateway on a regular base. Your NetScaler may drop down to D (there is an actual security thread affecting this site) or even worse if new issues arise. I’ll keep an eye on it and will continue reporting how to fix issues!